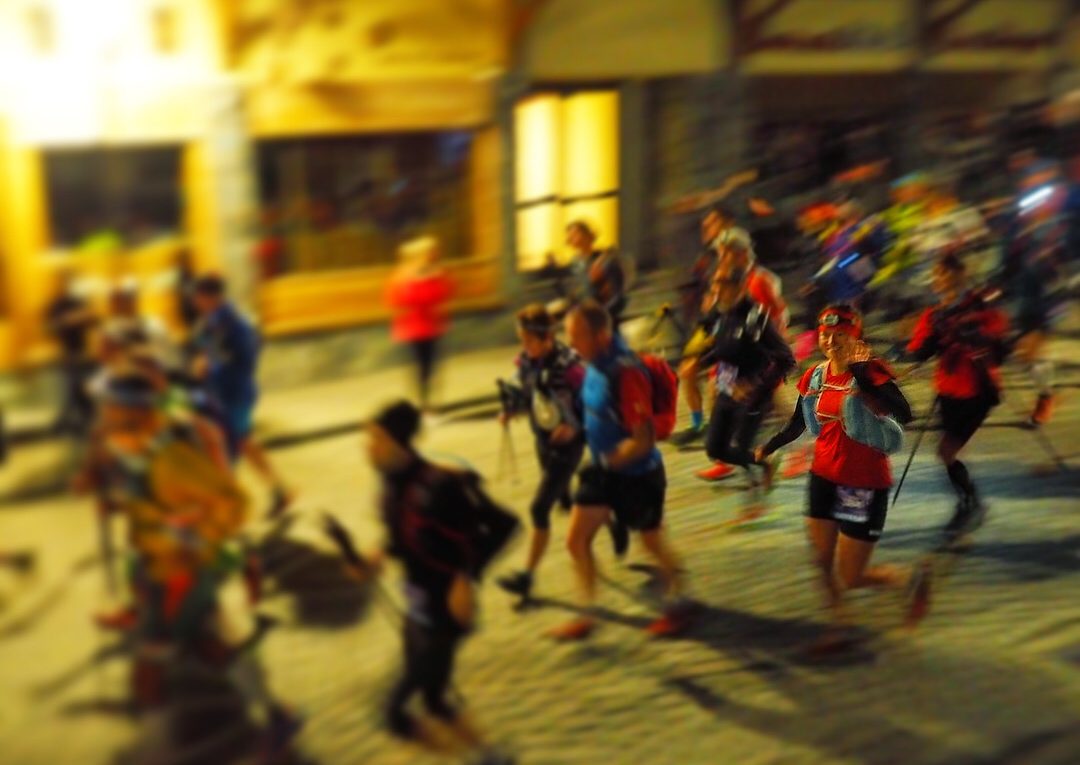 Georgina Smith, 34, a chef lives in Chamonix with husband, Dan Fitzgerald. She reveals how pulling out of the Ultra Tour Monte Rosa, a 72 mile ultra race in September 2018 eventually led to a podium place

When you train for a mountain ultra with 10 summits over 4000 metres, it puts the fear of god into you so you train hard! The race had been created by Lizzy Hawker, record five-time winner of the Ultra Trail du Mont Blanc, who had used the trails around Monte Rosa, which lie between Italy and Switzerland to train for the UTMB.

Renowned for its beauty and how brutal it is, I’d been training for an entire year. But just ten days before, I fell off my bike and ended up in hospital having stitches in my elbows and a CT scan to check for a brain bleed. Thankfully, I was OK although I didn’t tell the doctor i was planning to race an ultra.

As I stood on the start line the following week, with the mountains soaring up around me, I was so nervous but excited too. How would I measure up against such a brutal and stunning course. But fifteen hours later, at one in the morning, I hobbled into the aid station at Macugnaga in Italy absolutely broken. My confidence was shot. I’d covered 71 km and but there was still over 2350m of ascent between me and the finish line in Grachen in Switzerland.

I slumped over a bowl of soup and a huge slab of pizza next to my husband Dan, unsure how I was going to even eat, let alone carry on. I was physically and mentally exhausted. But I still couldn’t bear the thought of DNFing. No runner likes to give up, I was worried I’d feel like a failure.

The horror of quitting, made me ramble, trying to find reasons why I should carry on, that I couldn’t give up. Dan listened, as patient as ever. Then he gently talked me through the facts.

I needed to think about what my body had been through and how far I still had to go. Suffering is normal in an ultra trail but this looked different, was a running race really worth risking doing more damage? he said.

I remember his look of relief when I told him I’d decided not to continue. And the feeling of relief I felt meant I’d made the right decision.

I felt I didn’t want to race again

I don’t remember much of the week after the race, other than the stitches being removed from my elbows and sleeping. As a chalet chef in Chamonix, I was in the off-season so I had plenty of time to recover.

Autumn passed, in a firework of colour before the cold, snow monotone of winter during which I read, slept, climbed, swam, and watched a lot of movies.But I didn’t run. After all that training and the trauma of the race, I just couldn’t face it. Slowly, I began to feel better but running ultras seemed like a hazy memory – something that someone else I used to be.

Learning that recovery makes you stronger

I spent the winter trying to be kinder to myself, gentle to my body and not pushing so much. Time spent with friends in the mountains rather than brutal solo sessions, a slower pace of running, less hard training sessions, resting when I felt tired.

I learned how to listen to my body and allow recovery, and eat well. On reflection, I realised that my mind and body had been broken, not so much by the accident before the race but my training.

I’d never allowed my body to recover properly, to sleep enough, to take time out to do other things, to do easy runs rather than just continually beasting myself.

When race registration launched the next year, I dithered. It felt like unfinished business, but I wasn’t sure I could do it. I’d quit once, maybe now I would be quick to choose to quit again? I tried to convince myself it might be better not to try.

But when spring arrived with its burst of energy, I felt excited as the snow melted away to reveal the trails. In previous years, I would have launched into rigorous training, and got injured. This time, I increased training slowly and gradually, incorporating consistent strength work. I rested when I felt pain, and allowed myself myself to truly enjoy the feeling of running again.

It changed everything. I finally felt good again and decided to re-enter the race.

Taking on the challenge

The 2017 race fell the day after our 5th wedding anniversary, so after collecting my race number and kit check we went out. Prossecco and an Italian feast were a welcome distraction from the next day’s race.

The race plan I had was simple – go out, breathe, look at the views, absorb the beauty of where I was and look for the joy in running. That plan in place, I was calm, excited and looking forward to seeing my parents who had flown over from the UK, to meet me at the first aid station.

The first aid station (16 km in) was awesome, full of friendly people and memorable, delicious star shaped biscuits. I munched through a handful with a cup of black sugary tea and a massive grin. The weather was great, blue skies and the air was cool, perfect for running.

The volunteers in the aid tent told me that I was the first woman. I laughed in disbelief. I thought about rushing my tea and scuttling off to maintain that lead. But I stopped myself and thought ‘no!’ ‘Stick to the plan!’ I was here to prove something to myself, and no one else. So, I finished my snacks and happily trotted off into the day with a massive smile.

The race passed, sometimes faster, sometimes slower, day into night into day again, big highs and big lows. I ran throughout the night, and decided not to sleep. The weather changed, to mist and snow. Outstanding views, sunsets, sunrises. The welcoming hugs of my parents at aid stations. (Supporting a runner at this race is hard – it takes almost as long to drive around the mountains as it does for me to run over the high passes. There were 4 aid stations that were accessible by road, my parents made it to two and Dan made it to three).

After running for 29 hours, I finally made the last descent into Grachen, one of the shorter ones in the race, about 800m. It was gruelling, my body ached and my legs were exhausted. But from there I had about 15 minutes until the finish. I started sobbing, releasing all the anxiety that I wasn’t going to be able to finish.

I ran over the line with a huge grin, and a hug my parents and Dan. I was a mess of emotions; excitement, giddiness, relieved, overwhelmed and proud. And I couldn’t believe I”d finished third woman.

A year-long learning curve showed me that sometimes stopping, resting and giving your mind and body a chance to recover and heal, even though it feels like you’re allowing your body to lose your gains, was so worthwhile. I came back stronger and learnt that pushing through pain isn’t always the right answer.

If you would like to join us for the Girls Run the World Virtual Ultra in July, running the equivalent distance of the UTMB, sign up to our newsletter. #grtwvirtualultra.