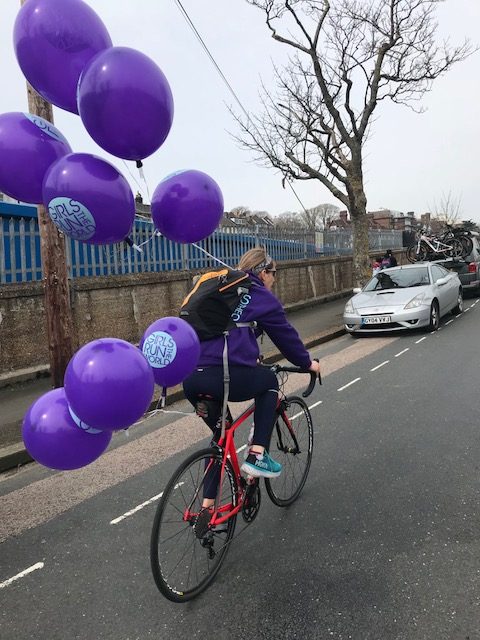 This weekend saw the second up in the weekend series of marathons with the Brighton marathon taking part in the HQ city of Girls Run the World. Were you there?

This weekend is a big one in the Brighton running calendar because of the Brighton Marathon. It’s now in it’s ninth year (expect something special next year for the 10th anniversary) and it has grown in popularity year on year, partly due to it’s proximity to London and the fact that it’s a draw for those who don’t get a London place.

Add to that the fact that there is also a 10km race at the same time, along with the Kid’s Mini Mile races the day before, and the entire city turns into a running metropolis for the weekend.

We had lots of runners taking part this weekend, as well as a few of our mentoring clients (well done Verona and Kellie!) and so we were out in force cheering and supporting. (Sorry if we didn’t spot you, it’s hard if we’ve not met personally – although I’m sure I saw Vix In Lewes from Instagram!)

Well done to every single one of you who ran the 10km or the marathon, but particularly to all the first time marathon runners. You learn a lot about yourself and your running when you do 26.2 miles for the first time (er, and the second, fifth and tenth time!) You may not realise those lessons the afternoon of the race or even the next day, but over the next week, things about your race will begin to sink in, what you executed brilliantly, what you realise in hindsight that you would do differently next time. (If, of course there is a next time).

If these lessons do filter through, don’t waste them. Write them down. Because after a week has passed, you’re likely to forget them and you don’t want your race day experience to go to waste.

One of the biggest lessons I have learned from doing marathons (I think my next one will be 10th or 11th) is that the race really doesn’t start until the last 10km. That’s when you need to dig deep and really focus mentally. Of course a marathon is tiring physically, but mentally, it’s exhausting!

But as so many of the runners out there showed today in the final stages, a smile goes a long way of lifting your spirits.

Well done to you ALL and particular kudos to our first timers out there today, Verona, Vanessa, Demi, Ellie and Verona, and to all the many 10km runners who took part too.

Of course, there was another big marathon taking place today too…Boston! Did any of you run? One more biggie go to next weekend …VLM!!

Whatever distance or wherever you ran this weekend, we’d love to hear about it. AND If you ran a marathon today, what is the single best piece of advice you would give to any runner who is about to take on London next weekend? Comment below.