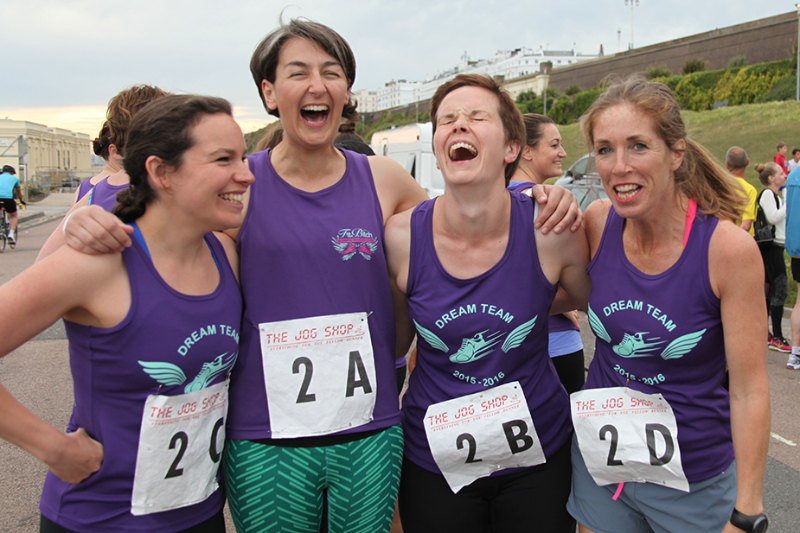 Although some people might be put off by the name of this event, it is one of the most inclusive and fun running events in Brighton. Great for building team morale and suitable for all levels of runners from total beginners to the super speedy. Here one of our runners, Sarah Crosier gives us her lowdown on the event

What is it: A relay race comprising of four team members. Each member takes it in turn to run 2.5km and then the entire team must run a final 2.5km together, ensuring that the whole team finishes together.

The Route: it is only 2.5km but with some short hills – don’t let that put you off though. It’s great fun and everyone is running different speeds so you never get left feeling like your the slowest runner.

The Weakest Link in June 2015, was the first event that I ever took part in with Girls Run the World. More a “team event” than a “race”, there were a few super speedy runners from athletic clubs ‘in it to win it,’ but my aim was ‘in it to finish it”. On entering, I’d done a few sessions of the GRTW hill training, Run for the Hills course but didn’t know anyone and was really new to running but GRTW organised all the teams and I found myself as part of a team a few other runners.

Before the day, we agreed that Karen would run the fourth lap as she was our strongest runner. It meant that she would have to run her 2.5km and then carry on running with the team without a break to finish. I’m always nervous on race days, and so I asked to go 2nd to get it out of the way. It also meant that I’d have someone to follow so I wouldn’t go the wrong way like one of our runners ended up doing!

There was a fantastic atmosphere with about 20 GRTW and runners from all the local running clubs – while there was racing it was also great for meeting people as there was lots of standing around cheering others while waiting for your chance to run. Plus, the distance is achievable and it was so informal and relaxed. Some people were even walking up the hills – not me, of course!

Our team was close to being last (or maybe we were?) but it really didn’t matter. We ran the final lap together and received a massive cheer from everyone as we crossed the finish line. I can’t wait to take part again this year. It’s great fun.