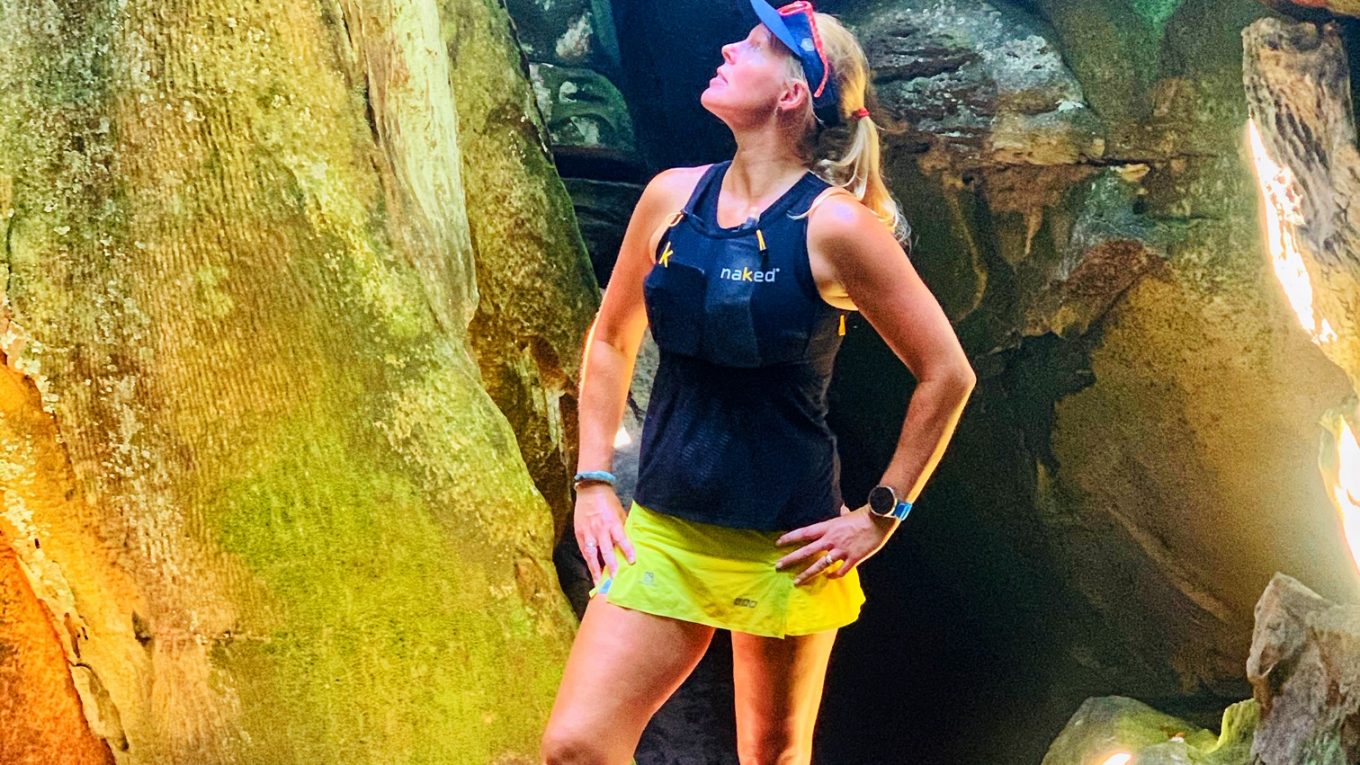 Girls Run the World ultra running coach, Lucja Leonard has taken part in some of the world’s most renowned races, from the Ultra Trail Du Mont Blanc to Marathon Des Sables. But few runners have journeyed as far, physically or mentally, with her latest endurance feat running 200 miles in the Big Foot 200 in the USA…

When I mentioned to non-ultra runners that I was thinking about taking on 200 miles, they thought I was crazy. But to me, it was about testing my limits, seeing how far my mind and body could take me.

Before I took on my first 200 miler, I’d already completed three 100 mile races, Leadville 100 in 2018 and UTMB in 2019, and the Mohican 100 in June 2021. I had experience but no idea how my body or mind would respond to running double that distance. Would it hold up, or would I crack under the pressure?

People often ask why I’m attracted to taking on something so extreme. I would have said the same thing a decade ago! But the more you start running those distances, the more ‘normal’ it becomes. The fact that my husband, Dion had already completed the Triple Crown of 200’s (three races of 200 miles in under nine weeks) in 2018 meant I had an understanding of what it entailed and someone to coach and mentor me.

Plus, my imagination was captured by the mystical challenge of running such a distance.

The event, Bigfoot 200 is a point to point race in Washington State, starting at Mt Saint Helens in the Cascade Mountain Range and finishing in Randle, Washington. It covers 42,000ft/12,802m of ascent through beautiful, tough, rugged and extremely remote single track trails, and is the equivalent of running from London to York while also climbing Mt Snowdon 12 times.

It was the first of my three 200 milers, known as the Triple Crown, which includes Tahoe 200 (sadly cancelled due to wildfires) and Moab 240 miles on 8th October.  Timed to take place over a nine week period, it means that you only get two or three weeks recovery between each race.

How do you pack for nine kit bags?

Forget stressing about the training, that’s the least of it when doing a 200 miler.  There are so many logistics beyond just the usual travel and accommodation ad pacing.

How, where, and how long to sleep, nutrition, hydration, kit, clothing, shoes, foot care, self care and drop bags. I had nine drop bags, four of which had to be transported from a earlier checkpoint to a later one.  Trying to plan what I’d would want at each drop bag was impossible.

I had no idea what time I would be reaching them, whether I’d want warm, dry clothes, what food I’d want, whether I’d need head torches, the list was endless.

In the end, I just filled them up as much as I could so I’d have everything I thought that I’d need. With the race being so remote, I had to assume Dion would not be able to be there and I’d be on my own.

Most of us are used to having a race strategy; what pace to run, and when to eat is probably the limit of it. With a 200 miler, you have to think about when, where and how you are going to sleep.

I decided to go with the flow, and sleep when I felt I needed to. It worked really well, with three naps, totalling 2h 40m over the full race time, of 3 days and 17 hours.

My first 20 minute nap was after running for 65.2 miles and 21 hours, right though the night. The second was a two hour nap in the race sleep tent at Lewis River aid station after 110.1 miles. And then my final sleep was in the wild in my emergency bivvy bag at the side of the trail for 20 minutes at about 4am on the third day, having been on the go for over 66 hours.

By then, my mind was playing tricks on me and I was convinced that I could see Michael Jackson in a white sparkly coat, having already seen a carriage being drawn by two lions.

Running for so long is a complete hallucinogenic out of body experience; I felt like I was floating, looking down on my body moving along the trail.

I’m not an elite athlete. I’m a middle of the pack runner but mentally I’m really strong which I’ve learned from running so many ultra endurance events.  There are highs and lows with every event, from 5km to 100 miles. But for 200 miles, the highs and the lows come frequently and hit you hard.

The course was relentless, technical, overgrown with felled trees across the trails (someone counted 209!) that I had to clamber over or under. There were mosquitoes and bees (I got stung by 2) and, river crossings where I was up to my thighs and sheer vertical descents.

How did I keep going? As a coach, I felt a responsibility to be that person that inspires the athletes I coach. And the event is expensive in terms of the logistics so I knew if I didn’t finish, it was unlikely I’d get another chance. That and mantras kept me going for a bit.

But eventually, none of that worked and it all came down to a battle of will and resilience.

The last seven miles were the hardest despite it being on the road having run 202 miles on the most treacherous and technical terrain; my body was screaming at me to stop, but my husband, Dion had calculated that I needed to run 14min/mile for the 7 miles to finish sub-90hours.

I was yelling at him; ‘No, I don’t want it, I can’t do it, it hurts, just let me stop.’ But something made me keep pushing through the pitch black in the middle of the night. I was so delirious with sleep deprivation, I was convinced that the bushes on the side of the road were animals and people cheering me on.

Then at last, I could see the finish at a local school running track ahead and the real cheering started and the bells started ringing, as I made a final lap of the track to the finish line, feeling like I was flying. Amazingly, my legs no longer hurt, the fatigue vanished and after 89 hours I finally allowed myself to believe that I was capable of what I had achieved.

I’ve always said that training for ultras is good for you, running an ultra not so much. I devoured pizza straight after the run  and Dion had to carry me to the car, shower me while I sat in a chair, fully clothed.

I managed to get a few hours sleep but I got up at 10am, conscious that I wanted to get into a regular sleep pattern to help my recovery. My feet were so swollen and stayed like that for two days, with terrible blisters on my heels that needed draining.

Amazingly, after a week of recovery Epsom salt baths, massage, and good nutrition, I could run again. It was only 4.5 miles and my hamstrings felt really tight, but knowing that I had two more 200 mile events to do as part of the Triple Crown, I knew I had to get back to it.

Running 200 miles has really changed me. At one point in the race, I remember seeing Dion as I ran into a checkpoint and bursting into tears. ‘It’s just so hard,‘ is all I could say when he asked me what was wrong.

But that sobbing was a real turning point. I felt helpless, crushed by the enormity of the task, unsure I could go on. But I did and it has proved to me that you can do anything you want in life, you just have to keep on putting on foot in front of the other and no matter how horrific things are in one moment, you will get through to the other side.

The Good, the Bad and the Ugly…

Seeing the sunrises and sunsets during the race.   It was almost like I had timed my position perfectly to be in the best location to seem the sun rise and fall, absolutely magical.

Deciding to change my trainers to a half size bigger halfway through the race to help preempt swollen feet. It just meant that my feet kept slipping in m shoes resulting in huge blisters.

There is no escape from the utter relentlessness of events like these. The terrain of was brutal to the point of feeling sadistic. Every time I’d overcome my fear of one part of the race, I felt like I was punched in the face again by another part!

It hurt to walk, to run, even sit. My feet were so sore from the sheer amount of impact that is going through my feet, it felt like red hot daggers stabbing into hundreds of pressure points at the base of my feet.

Lucja is available to coach GRTW athletes on a 1-2-1 level, or you can purchase any of the training plans that she has created as part of our membership or on a one off basis. In 2022, sign up for our Train Strong Together packages launching in November 2021, training for a 55km mountain ultra.