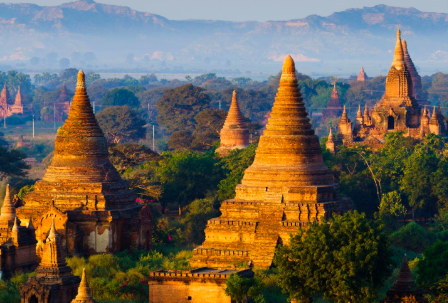 Tucked away in central Myanmar is Bagan, home to more than 2000 temples through which the route of this marathon passes. From the 9th-13th centuries, these temples were the capital of Pagan Dynasty which unified what is know Myanmar. Now a UNESCO World Heritage site, it’s a major draw to the slowly burgeoning tourist industry.

Should you travel there or not? This is a country that has been relatively untouched, it’s temples and street life authentic to the point that it feels like you’re travelling back to a bygone age.

Recent clashes between government forces and Rohingya Muslims in Rakhine State has been said to be tantamount to ethnic cleansing, according to the United Nations. Which has led to some saying that tourists should ban visits. It is up to you but avoiding visiting could harm the local people as staying away.

Whatever you decide, this is a beautiful country and an incredible place to run and visit. And then there’s the incredible food!

Choose to run the marathon, half marathon or 10 km – but most importantly, come to eat! San Sebastian is renowned for it’s food scene. So make sure you have enough days after the marathon to make the most of refuelling with pinxos or visit the incredible Mugaritz, in the hills over the city.