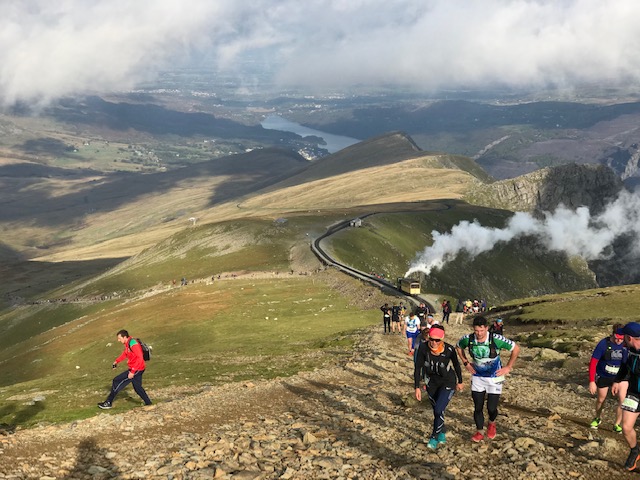 As we officially hit Autumn, the running season is hotting up with road and trail races taking place all over the UK this last weekend. Not least the Maverick Inov-8 X series Snowdonia 2018,  the first of our UK wide GRTW Get Together Events From 3,145 feet on the shortest route to 4,055 feet on the middle route and up to 6,277 feet, the Maverick inov-8 X series Snowdonia race offers three distances, 17km, 23km or 43km but all three require a different approach than any usual road – or even trail – race because this is the mountains. And they take no prisoners!

We had 20 runners taking part, across all distances and everyone set off together up the Llanberis path  towards the summit of Snowdon with most runners adopting a fast hiking method before the tarmac even ran out.

My approach was to run everything I could, and if it became so steep that running became ineffective, to hike as quickly as I could. It wasn’t long after the tarmac section that I joined everyone else in walking. Lots of runners had set off with collapsible poles and, having not done any mountain races before, it was interesting to note the way runners used them, swinging them forward and using the swing of the pole to almost glide forward up the hill. (If you want some tips on techniques for running up or down technical terrain, listen to our YouTube interview with the women of this year’s marathon winner, in a time of five hours and 1 minute, Julia Davis by clicking here).

We could not have had better weather as we climbed up and up, the sound of everyone’s heavy breath joined by the huff and puff of the Snowdon train, a plume of smoke trailing behind it, as it chugged up with the many passengers who must have been surprised to find the trails full of up to 500 numbered runners.

As we climbed, the weather got colder and windier, so it was time to stop and put on a jacket, buff and gloves, which was at just about the point that the 17km route turns to descend again (not quite making the summit, which disappointed some of our runners) while the middle route continued up to the top and then it was a thrillingly, hairy descent (near the top, the marathon route also veers off to follow a separate route) to the refreshment table at the bottom.

After a big ascent and then trying to jump from rock to rock, my thighs were like jelly, and I certainly did not look like the couple who had climbed next to me and then disappeared down the trail, literally dancing amongst the jagged rocks, seemingly oblivious to the tiny narrow spaces where you had to place your foot.

By the time I hit the refreshment table, I was very glad of the coke, salted crackers, potatoes and cola bottles that were on offer, all which went in, in one handful. A short road section on the level was soon followed by another ascent along a zig zag path and then finally, a runnable trail path back to the race finish.

This was the first of our UK wide Get Together races, where we invite runners from around the UK to join us at an event, which we choose based on it offering a challenge but in an inspiring location – we provide the training plan, you train and meet us there. So well done Kate Dolphin from Malvern who joined us there and took on the mighty marathon and her sister, Lily Price. Elsewhere in the UK, there was also lots of other events going on including the Windsor Half Marathon , a two lap, undulating race that takes place with Windsor Castle as a backdrop. Well done to Jenny Hall, who ran.

There was also Barnes Green Half Marathon, a road half marathon, renowned for fast times and for attracting lots of club runners. It’s definitely one for the calendar if you’re looking for a good one to train for next September. Although if you’re looking for the perfect Autumnal run for next year…one of our runners took on the Forest of Dean Half Marathon.  She reported that it was full of trees ablaze with the colours of the season.

So, well done to all of you who ran this weekend. If you’re interested in our Get Together races in 2019, sign up to our newsletter (visit the main page of our website) as we are just finalising the events and will attempt to organise discounts with the event organisers.

Did you PB this weekend, run somewhere amazing that other women would love to hear about? Comment below and share your news.