Of course, the big Daddy of events in terms of marathon and race destinations this weekend is the New York marathon. But these less obvious events are just as incredible, if not more so as amazing places to visit

We’re big fans of events that offer a variety of distances, which means it’s suitable for a big group of different friends taking part. We are also rather partial to any events in destinations where the food is GREAT.

The Italian Lakes offer so much, particularly Lake Maggiore, with its stunning little villages that hug the shoreline. The second biggest lake in Italy, it touches Switzerland and has so much to offer for a long weekend running visit, with UNESCO world heritage sites, stunning villas, incredible food and a great race atmosphere. 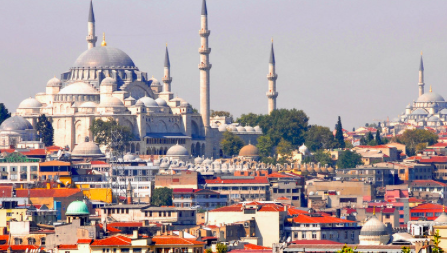 Small wonder that this race attracts up to 30,000 runners despite it’s November schedule as it’s it’s one of the only races in the world where you can boast running from Asia to Europe.

Starting on one side of the Bosphorus bridge, you run across it towards the old capital of Constantinopole, with the minarets and city’s ancient mosques etched against the sky.

It’s an incredible place to run, with Istanbul once being the epicentre of the ancient Spice Routes, and the route passes past ancient places from the Ottoman Empire and under viaducts which have stood since the year 368 when the Roman Empire ruled most of the world.

There can be few sounds more atmospheric than the call to prayer as you run a marathon with a finish in the Hippodrome, once home to fierce chariot rides a stone’s throw from the Blue Mosque.

This is a city that is a fantastic place to visit for a long weekend, with it’s history, hip neighbourhoods, great shopping in the ancient markets and amazing food . Rated by our customers as one of Girls Run the World top race destinations on our running weekend tours. (Psst – be in the know and head to the rooftops for amazing cocktails and hidden restaurants).