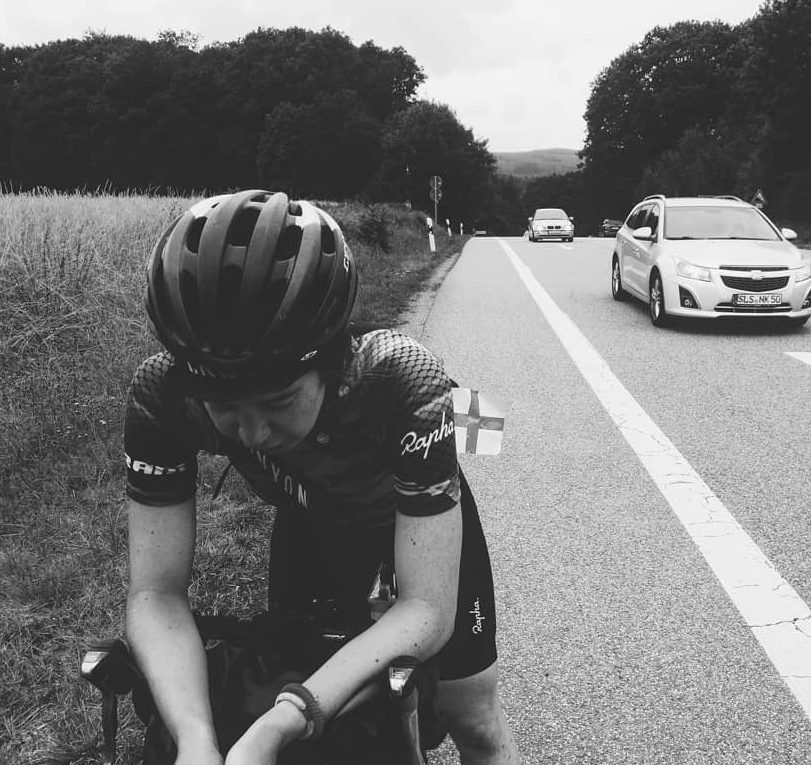 Danielle Payton, 27, a teacher from Norfolk discovered cycling after losing her friend, Harry Uzoka to a senseless knife attack in 2018. Here she shares her adventure of cycling across five countries in five days.

If someone had told me that at the age of 27, I’d be cycling across five countries in five days with only a spare change of shorts and an old pair of Converse for a change of clothes, having previously worked in high end fashion, I would have laughed. Yet, that is exactly what I decided to do last summer of 2019.

Just 11 months before, my friend Harry Uzoka, a catwalk model, was killed in a vicious and senseless knife murder in Shepherds Bush, London. He was just 25 and had his whole life in front of him, it was so pointless.

His death became the catalyst for change in my own life, I no longer wanted to put things on hold for the ‘right time’ as Harry’s pointless death had shown, life was too short.

The weeks following his death were dark, I questioned my life decisions and asked myself if the lifestyle that I had worked so hard to achieve was what I really wanted. I was working in London as a garment technician at a high-end fashion company and whilst the embellished career choices that I had made to that point looked fantastic on paper, inside I felt empty.

My commute at the time was 20 miles by bike and I’d always used the cycle home to de-stress from work. But one evening, after Harry’s death, I just decided to keep on cycling. I ended up riding 50 miles through London. The solitude of having time to sit with my thoughts and process Harry’s death meant that by the time I arrived home, I felt so much better.

The further I cycled, the more clarity I had to process what was important to me, and from what started as a commute turned into a passion. Ten months later, I’d left my job, moved out of London and had retrained as a teacher.

One night, celebrating my new career with my friend, Julian, we drunkenly came up with the idea to bike pack through five countries in five days, France-Belgium-Luxembourg- Germany-Switzerland, covering 120 miles per day. We gave ourselves a month to train.

Julian was a weekend warrior and on our first training ride, he showed up in some Nikes – he soon upgraded to cycling shoes and cleats. As for my own training, I decided to up my mileage and did one 200 mile cycle as preparation. But I knew that riding 120 miles every day for five days would be as much mental as physical.

The trip itself was filled with excitement and a sense of adventure. Being out on the open roads with good company and an appreciation for the journey helped to put the last few years into perspective. One day cycling on a descent through the Alps, taking hairpin bends and flying at 40 mph, it was such a thrill.

But this wasn’t always the case. Times proved challenging when I had accidentally planned for our route to take us onto one of Europe’s busiest roads, and we were forced to cycle along it. There was also a scary moment when a herd of cows surrounded us in the middle of the Alps. Instead of deciding to crumble at the thought of things not going to plan, I decided to rise to the occasion. I had already overcome so much and knew that by stepping out of my comfort zone it would be making me mentally stronger.

The cycling community we met on the road were amazing too, with everyone always asking about our route and chatting to us. At times, the language barrier was an issue, but it was always interesting to hear other adventures and to share experiences. One of the most inspiring people we met was a man in Switzerland, who was in his late sixties. He had separated from his wife earlier in the year and had spent three months cycling around the world and had many more months on the road ahead of him. His story reminded me of the importance of taking something positive from a negative.

Completing the journey became so much more than just deciding to cycle around Europe. It became the moment when I decided that I was never going to put off doing things. As Harry’s death had shown me, why wait until tomorrow when there’s still the rest of the day left?

I’ve now decided to enter Ironman races, and have learned so much about swimming and running and I love seeing my body get stronger month-to-month. My A race, Ironman Bolton has been cancelled this year, but that just gives me another year to get stronger.

Until then, I plan on spending my time cycling, surfing and probably drinking more prosecco whilst planning my next adventure.