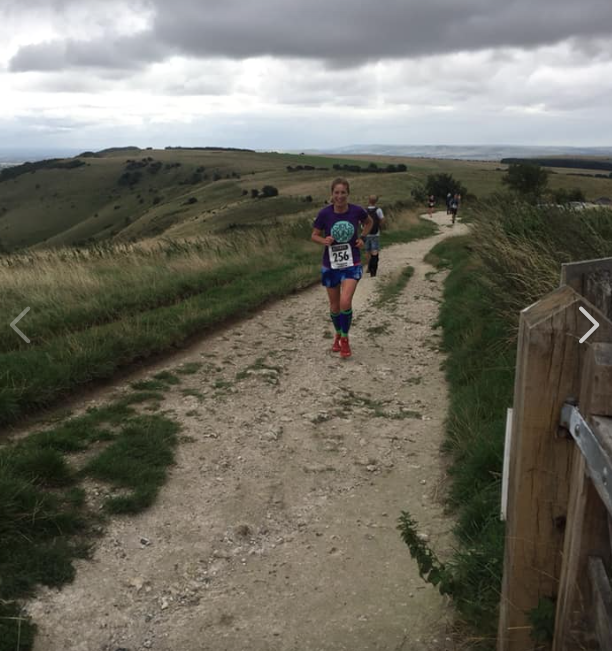 While many of you all seem to be making a final escape to European shores with some beautiful holiday running pictures being posted, back in the UK there have been some equally stunning races taking place from the Sussex Hardway 13  (yes, it was hard!) to the intriguing sounding Two Tunnels Half Marathon… (18-19th August) Why would you run up tank tracks ascending 419 ft with a gradient of 13% on a August summer Saturday? This is the very start of the appropriately named The Hardway Half, a just over half  marathon (13.7 miles)  event from Sussex Trail Events. It’s an evil start to a stunningly beautiful route that follows the South Down’s Way at a time of the year when the fields are full of golden wheat and you can see as far out to the Seven Sisters.

A group of GRTW runners took part, mainly as training for the upcoming Get Together Maverick Snowdonia. As my glutes felt like they were on fire on the return leg of this out and back race, all I kept thinking  is that the Snowdonia event will be a great deal more difficult, climbing to over 3,000 ft in the first five miles (agh!).  But then, that’s the beauty of doing an event as a training run; it pinpoints EXACTLY what you need to focus on in your next block of training and helps focus the mind.

The GRTW ultra coach, Sarah Sawyer placed second lady in this weekend’s event and her secret for getting super strong on the hills? Lots of hiking up hills with 8kg of dried chickpeas in her backpack (her A game is the Grand Raid des Pyrenees, a 123km races with 7000 metres of ascent which takes place over the August bank holiday – good luck Sarah!)

And one more thing to add about The Hardway Half…I thought it was called this because it was a hard trail half marathon. However, it could equally have been called this because actually, the second half of this race is MUCH harder than the first. Bear that in mind if you do it next year!

Elsewhere, we loved the sound of the Two Tunnels Half Marathon by Relish Running Races in the beautiful West Country around Bath. Taking in the gorgeous countryside of the Limply Stoke Valley, the route is on mixed terrain footpaths and trails, taking in the beautiful city of Bath before going to the riverside and traveling through the Combe Down Tunnel, which at 1672 metres long, making this event the one with the longest underground section of any race. Through Monkton Combe village and along the Somerset Coal Canal before merging with the Kennet and Avon Canal, this sounds like a truly stunning route.

They also have half marathons in May and July, so it may be worth checking out their events for 2019.

But over to YOU! Where did you train or what event did you take part in? Anyone run Parkrun abroad this weekend?

Based in Brighton? Don’t miss our Adventure Runs every Thursday this summer. Details of all Brighton events can be found here