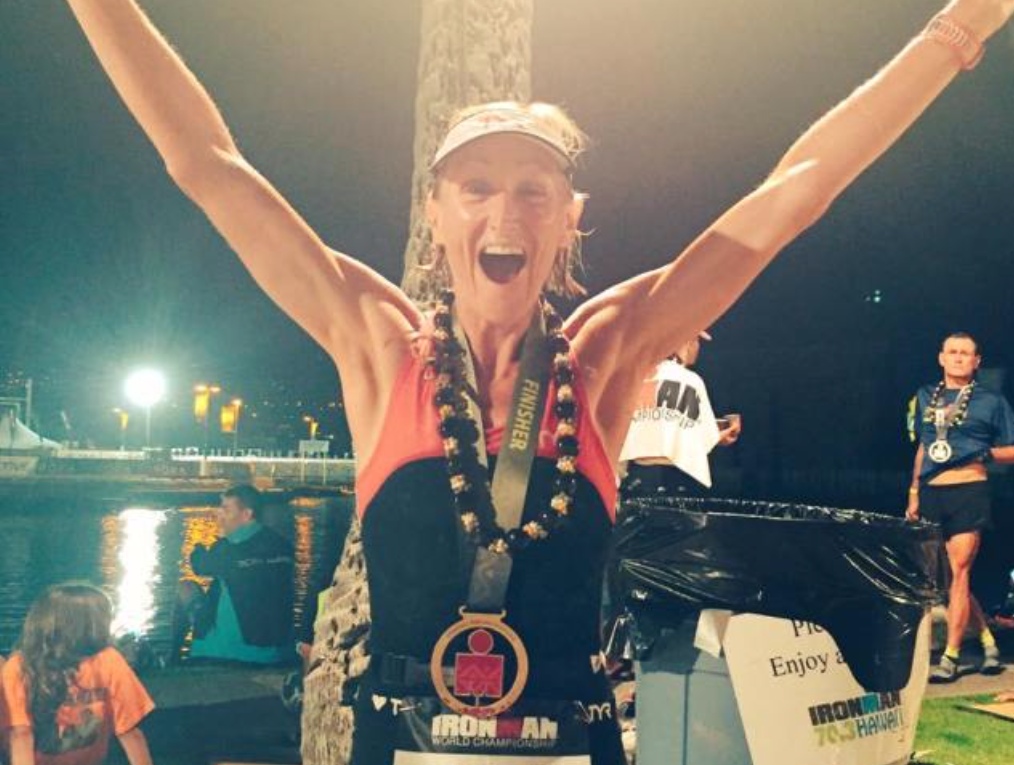 Jane Hansom, now 51, was a wine-swilling, smoker when she first took up running a little over a decade ago. Read how she became a sub 3 hour marathon runner and a championship Ironman triathlete all while working full time in her marketing agency

I started running 12 years ago, only because one of my clients, Sony Playstation had five golden bond places for the London marathon. I was three stone heavier and looking after clients, in the advertising industry and going out and partying too much. I was so unfit.

Bu they insisted that I run the marathon and so I trained for 6 months and went from a size 16 to a size 0, Iosing over three stone. I was terrified of the race but managed to sneak in just under 4 hours using training from a book I’d read called, Four Months to a Sub Four Marathon. And I was still smoking cigarettes!

The moment that I crossed that finish line, I was hooked. Within a year I did another two marathons and managed to knock another hour off. And then I ran the New York marathon one year later, in 2.58 and won prize money as the fastest master, female over 40.

But after finishing at 2:58 again in London Marathon, I wasn’t convinced I could get my time down into the next bracket of 2:30 and my brother convinced me to do a triathlon.

I’d grown up swimming, so I bought my first bike off Ebay, two sizes too big and entered a sprint triathlon that was a test event for the London Olympics in 2012, in Hyde Park.

I did it and won, not just my age group but the whole thing! I couldn’t believe it. That was me hooked and decided to bite the bullet and try an Ironman, which comprises a 3.8k swim, 180k bike, and then a marathon. I did my first one in Switzerland and I won my age by 24 minutes.

What I love about the ironman is that you don’t have to go very fast, you just have to stay the distance. It’s quite easy to be decent when you’re not a spring chicken, because most of it is about mental fortitude, not speed.

Where has your winning mindset come from?

I am the youngest sibling of five and have always wanted to do everything 100%. I don’t really do anything in half measures!

I ended up going to Kona the World Ironman Championships three years in a row, and I’ve come second twice and won it once. That’s pretty good from starting in a bad position. I used to drink, smoke, and party. But apparently all of that can be reversed!

How do you fit in all the training with a full time job?

I run a full-time marketing agency and I set my alarm clock for 5am, training from 5.30-7.30 every morning, and often an hour at night. My social life went out of the window, and I found ways of fitting in client meetings in the day, having a lunch meeting or a breakfast meeting instead. I do like to be in bed at 9, it’s the only way it’s manageable!

How do you stay the motivated to do that?

Usually, I would do that from February-October and relax more between October-February allow myself to have a few drinks, and puddings. Seriously, I can put on about 5-10 kilos. Come January-February i just work really hard and work it all off again.

How have you kept motivated during covid?

I have kept training, but not with the intensity that I would normally do. This is a good time to bank a load of consistency.

I’ve never trained super hard with intensity, but consistency is key. Seriously, if you don’t miss a session, and you’re consistent, it doesn’t really matter if you’re not hammering every session, because consistency will last you.

How do you stay consistent and manage stress levels with a high-powered job?

A good night’s sleep is so important. That’s the one thing I have often thought that if I had more of, it would make me a better athlete. If you only get 6-7 hours a night, it does show. If you can get eight hours a night, you will recover so much quicker, you’ll feel fresher, be less stressed, and you’ll burn weight quicker. I cannot underestimate the value of a good night’s sleep. (Visit our Instagram Live Series on Recovery Strategies, from June 25th -July 23).

And I eat well, following the maxim, breakfast like a king, dine like a pauper. Lunch will be a sandwich or a salad depending on what sort of session I’ve got. I won’t have any carbs after my last session of the day. So i’ll have vegetables and protein in the evening.

What are your strategies for racing hard?

I never go out too fast. Something that’s been with me through all of my marathon training.

On the Ironman marathon, as well as the bike, it’s all about conserving energy, I don’t start to push until mile 20, the last four miles are hideous. At the end of the day it’s about keeping a consistent pace and not slowing down. Finish as quickly as possible and end the agony.

Have your mental strategies changed as you’ve got older?

The more long distance races you do, the more comfortable you are with what to expect. I was terrified of my first Ironman in Switzerland and didn’t know what to expect so I took it easy, and I conserved everything until the last 2 k which I did fast.

My second ironman was Kona, and as I was coming out of the energy lab somebody told me I was in second place. I had no idea because as far as i was concerned, there were 87 women racing and if i had come top 10 I would’ve been thrilled. I ran as fast as I could, I think my last mile was a 6 minute mile which is unheard of. The more races you do, you get encouraged that you can push a bit earlier. Now I try to do that.

As you’ve got older has training got harder or easier?

Harder, because I get tired more! Last Saturday I did an hour and a half swim session, which is pretty normal, but I was absolutely exhausted and I had to have a nap on the sofa. It has got harder, as a 51 year old. I’m trying not to get slower, but it’s inevitable.

Have you noticed a difference in equality in gender participation?

I do think more women are being attracted to triathlon which I’m really pleased about because triathlon has enriched my life enormously. Some women may be put off because you have to put on a trisuit, which can make some women feel self-conscious. My response to that is that nobody cares, it’s not a beauty contest.

Are there ways that you’ve found to be smart in the way to train?

The mornings are key. You have to set your alarm and don’t press that snooze button. Once you miss that alarm. you are on the back foot all day.

I roll out of bed and either pull my trainers on, or get to the pool, when I’m still half asleep. You need to just get out there and do it. It sets you up so well for the day and you feel fabulous. I’ve never regretted getting up for a morning training session. If you get that session done it’ll be easier. Being organised helps, lay out your stuff the night before, get everything ready. Preparation helps.