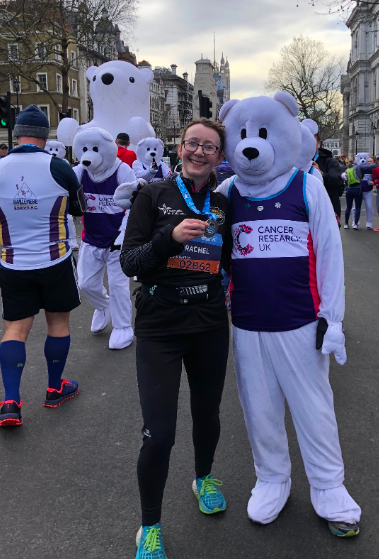 The final of our four winners of #grtwproject26.2 winners, Rachel Sparkhall, 43  reveals how accountability and b-run-ches have been so important for the first four week block of her Paris Marathon training…

I read a quote this week, ‘the marathon is the victory lap’ and this struck a chord – it will be the culmination of 14 + weeks of not only running an amazing amount of miles but also the thinking time and juggling of work/life as well – I think the mantra ‘this is the victory lap, enjoy it’ might really help me on race day!

Running a marathon has never figured high on my bucket list until last year when I completed the South Downs 100KM Ultra Challenge. If I could cover 100KM with a run/walk/run method in 16 hours and survive training through the hottest summer in decades, then maybe, just maybe I could run a marathon? And so I was delighted when I won the #grtwproject26.2 competition to win a mentoring package worth £300.

GRTW coach Tara initially loaded a four week block of runs on Training Peaks, which was brilliant as it allowed me to see the progressive mileage and speed work build up and I found the alternate run days worked well, allowing me recovery time and to also plan life around training rather than it dictating it.

It meant some early mornings and dark evening runs, but I’m fortunate that I work from home on some days which allows me to be more flexible. Still, training for a marathon can be all consuming.  To compensate, I integrate my longer runs with coffee/cake or breakfast get together’s.  This means I have a destination to run to which is more motivating than constant laps/loops on the longer routes.

In the first couple of weeks, I had a few issues with picking the right routes that suited the tempo and interval training and had a couple of rather frustrating watch malfunctions. All I really wanted to do was run and perform well, so I invested in a Garmin watch and I got this nailed.

If anything, the runs have been slower than I’ve been used to but with that, came more focus on tempo and interval work which forced me to actually start doing them rather than just reading about them.

I think the most important point to make about training with GRTW  can be said in one word – ACCOUNTABILITY. With all my training runs planned and any other training recorded, I’m motivated to get my trainers on and do the session, particularly as Tara can see my exact results on Training Peaks.

The first 2 weeks flew by but by week 3 I hit a wall. I felt fatigued and had taken a lot of medication for migraines which I’ve suffered from for years, so every run became a challenge.

Usually, running helps me feel like i’m cleansing my system of any medication but intense exercise can also trigger a migraine attack so it’s a double edge sword.  It’s very easy to curl up in a ball and drown myself in the vat of sugary products even though I know that it will only make things worse.

A hilly run on my third Sunday long run was awful and if it had not been for my coaching plan, I wouldn’t have gone.  The first hill run was truly awful and I stopped wanted to go home, but then I thought about Tara and the effort she was putting into helping me and I thought about how I’d feel if I failed to hit my goal. GOT.TO.KEEP.TRYING. Hopefully this extra little push is going to make all the difference in getting me closer to that sub 4 hour goal.

Thankfully, week four has been a recovery week with less mileage and it’s been a fabulous week. Although the weather turned colder, each run was enjoyable and I ended it with the 10K London Winter run.  A fantastic fun themed event where 20,000 participants descend on London to run amongst penguins and snowmen, it was great to go as part of a group and enjoy the social aspect.

I started the run, semi frozen in -4 temperatures and with the niggling doubt that I’d lost some speed with all the longer runs I had been doing but was pleased to see that I was achieving 7.30min/miles on course and ended with a PB of 48.10 on what is a flat but very busy course.

Roll on the next block of training. Now, less than ten weeks before I stand under the Arc de Triomphe.

If you are interested in having a personalised training plan written by Girls Run the world or our mentoring package, please email info@girlsruntheworld.co.uk