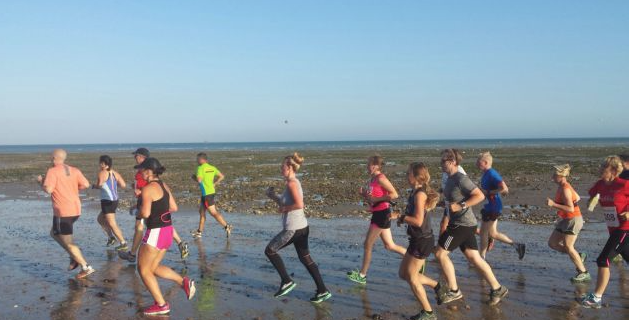 I didn’t race this weekend as I was busy checking out  more routes for the Girls Run the World Trail and Yoga Retreat this coming weekend (July 20-22), and it sure was a hot one! Which is why I headed off for an open water swim in the beautiful Weirwood Reservoir rather than run again.

But elsewhere, there was lots going on in the trail running stakes, not least the spectacular Gran Trail Courmayer, with distances of 30, 50 and 105km to choose from…the winning woman of 30km took 3 hours 50 mins, 47 seconds while the 102 kms took 18 hours, 51 minutes and 12 seconds. That says it all about the elevation, eh? Still, it’s a race that’s on my bucket list.

Closer to UK shores, literally, was the Beat the Tide 10km in Worthing on the South Coast. This is a great concept, where you run an out and back along the beach, trying to beat the return of the tide to avoid getting wet feet.  One GRTW runner who took part, Tanya Taylor said this about the race: ‘It’s always fun when you do a race that’s a little bit different to the norm- and running with a few hundred people across the sand definitely felt more fun than not. Well organised, relaxed & beautiful scenery- win, win.’ One thing to remember though, wet sand…it’s a little tougher to run on but definitely not as tough as soft sand! And of course, this weekend saw the 100km Race to the Stones, along The Ridgeway. Did you run it?

And for those The other big race of the weekend was The British 10km in London, which goes right through the heart of London. Did you run it?