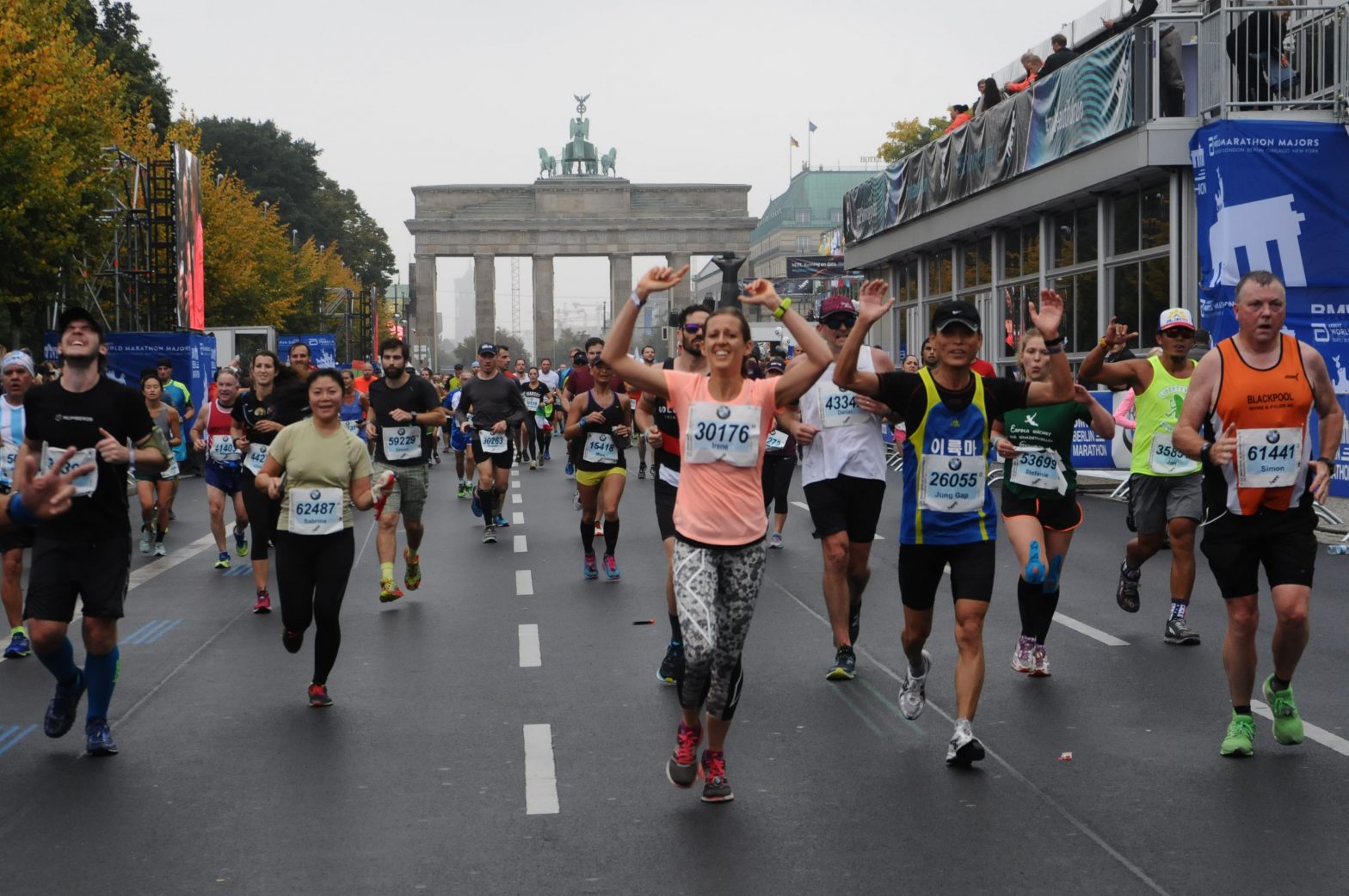 Marathons are a fantastic way to explore a city and culture and Berlin is one of the best, giving you the opportunity to run through it’s history as you run between east and west as Irene Maulenda reports… Waking up on the morning of the marathon in Berlin, I was both excited and terrified. It was my first ever marathon, one that I’d wanted to do for years and I’d finally got in on my fourth ballot attempt with some of the other girls from Girls Run the World.

We’d travelled out and were staying separately in different areas which meant we all made our own way to the race start line, although i was with my parents who’d flown from my home in Spain to watch. But even after saying goodbye to them and going off to my starting pen on my own, I didn’t feel like I was alone. It was like being part of a big party from start from finish.

I’d arrived at the race at 9am for my race start at 10am (editor’s note: the race starts at 9.15am but is a staggered start with those with proven fast finish times going off first), had handed my bag in and spent the usual amount of time queuing for the toilet. With approximately, 43,500 runners, Berlin has a busy start area so it’s good to give yourself plenty of time – an hour is enough – to sort yourself out and walk to your start area.

Everybody in my starting pen wore the same excited look that must have been on my face too, and the atmosphere was electric. To keep myself calm while I was waiting to race , I read a few texts from my friends and thought of other runners who inspired me, such as my fellow runners in Girls Run the World, who were at that moment also taking on their own challenge doing the Ragnar Relay, a 170 mile run over the Kent Coast and my best friend who’d been the first person to inspire me to start running time seven years ago.

I didn’t have to wait long though before we were off, running down the streets of Berlin in a group like a huge street party.

I’d decided to ignore my intended race pace and to run to enjoy the experience, rather than trying to stick to a pace which would have been impossible to do in such a crowded group. It meant that I was able to chat to other runners, including  Jaime and Javier, both Spanish, who told me that they were running their third marathon. I told them it was my first. “You’re going to experience things you’ve never felt before,’ they said. ‘But you will love this day.”

I lost them at the next water station, where I managed to perfect my technique of drinking while still running. Without an official pacer to follow, I spied a tall guy who was running a similar speed and decided to follow him to keep myself motivated. That said, the atmosphere was so amazing I felt buoyed up simply running along with so many others from around the world.

I was running for MacMillan Cancer and when I passed another runner who was also running for them, I said hello. Her name was Danielle, and she told me she’d also done London and LA and that I’d love London if I ever got the chance to run it. I wished her luck and set off after my unofficial ‘pacer’, through the 10km mark, where I high fived all the kids holding their hands out on the side of the route.

My German is rusty but I managed to say a few things “ganz toll” (great), genau (genius) and fantastisch (fantastic) to other runners, which helped to keep me distracted up to the half marathon point where I met a couple from Bilbao in Spain. “This is the second time I’ve run in Berlin and it won’t be the last, I love this race!’

Leaving them behind, I started to notice other runners were beginning to slow down and cramp, but I focused on sipping water at every station and taking on a gel every five miles. That and the iconic scenery kept me occupied as it started to feel harder. The route wound past the iconic Rathaus Schöneberg, the city hall for the borough of Tempelhof-Schöneberg which had served as the seat of the government of West Berlin till 1990. It’s where President J. F. Kennedy had proclaimed his famous “Ich bin ein Berliner”, and where so many people had gathered when the Berlin Wall came down in 1989. The sense of running through history as I ran through just gave me goosebumps.

As I approached the 20 mile mark, I began to feel a bit anxious as I’d only ever ran this far once before when I’d bonked. Training for Berlin, my biggest fear was that I’d hit the wall but suddenly, I was past the point and reaching 21 miles feeling tired but good. Having my printed on my bib so that people could shout my name really helped encourage me and kept me going. And when I saw someone else struggling, I’d call out their name and say, ‘come on mate, you can do it.’ I don’t know whether it helped or annoyed people but it helped take my mind off the discomfort! By the time I started my last 10k, I had my parents to look forward to seeing who’d arranged to wait at the next water station.  AS I turned the corner into K’damm, music blared out and I could see my dad’s red raincoat (Editor’s note: get your supporters to wear something bright, or hold a colourful sign on a tall stick so you can spot them) and started waving like a mad woman.

I managed to blow them a kiss and as I ran past I began to feel even stronger. ‘Was I crazy if tried to run a bit faster?’ I thought. I checked my running form, mentally scanned my body for anything that hurt, and I decided I felt good and I was going to go for it.

I have never loved running more than that moment. People were shouting my name, and I couldn’t stop waving and smiling, it felt so AMAZING. By now, I was passing people and when I ran past the last aid station at the 40 km point I felt like I was flying. Finally, I could see Brandenburg Gate in front of me, and started to sprint. It nearly finished me off when I then realised that the finish line was a further 400 metres but I found the strength and pushed through to cross the finish line in 4.18.21.

When the race volunteer hung my medal around my neck, I was so overwhelmed I burst into tears and was still crying in the race picture. Heading out to meet my parents, I spotted the unofficial race pacer I’d followed for most of the race standing with his family. “Thanks so much for your help, I’ve been following you most of the race, you kept me going.” It turned out that it had been his first marathon too.

Berlin is renowned as being an iconic race and all I can say is that it lived up to and surpassed expectations. As a trail runner, I’d been worried about whether I’d enjoy a road marathon but the Berlin marathon is fantastic, for the scenery, its history and the support and sense of camaraderie amongst the other runners.

The Good, The Bad and the Ugly

How to get into the Berlin Marathon

The Berlin Marathon is very difficult to get into on the ballot which is why so many people enter via running travel companies like 209events.com. The other ways to do it are as a fast runner which affords you automatic entry, or enter the ballot as a team. It doesn’t mean that you have to run together, but it means that you ALL get in together if accepted.  We don’t know whether it improves your chances but Irene had tried three times separately without success. It was fourth time lucky for her and first time success for all of those she entered with who were all women. Worth a try!