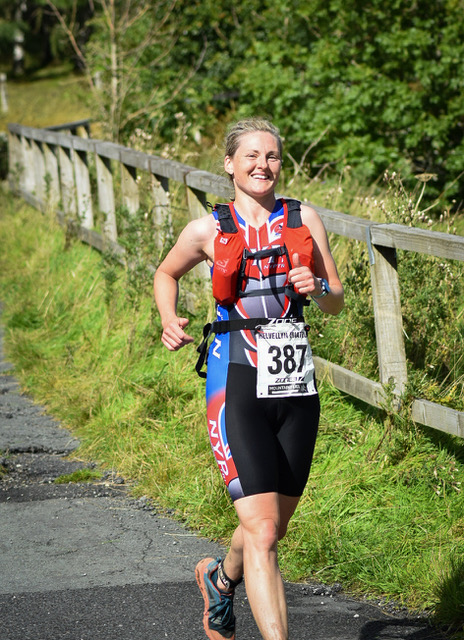 Sharon Leeming, 41, a mum and part time school teacher, gives us the lowdown on the Helvellyn triathlon, billed as one of the toughest triathlons in the world...

Helvellyn triathlon, set in the Lake District, had been on my wish list radar for ages. It had always felt out of reach with its 1489 feet of climbing on the bike, followed by a further 3118 ft on the run but after a month of training on the trails as part of the GRTW V-Alps Ultra and lockdown wiping out most races, I felt confident about entering.

I had every reason to be fearful as the Helvellyn Triathlon, is billed as one of the most brutal to complete, not just because of the climbs but the weather. And it certainly lived up to the accolade.

On the morning of the race, I was so excited, particularly as it was the first event back after Covid, and the buzz around the transition area reminded me exactly why I do this crazy three discipline sport.

It was even more exciting because the Professional Triathletes Organisation had put up $15,000 prize money, to be split equally between the top 10 finishers, regardless of gender. This was balanced fairly by allowing the professional women a 28 minute handicap head start.

The start line up for professionals was impressive, from Alistair Brownlee and Joe Skipper, to Lucy Gossage, Nikki Bartlett, India Lee and Lucy Hall. It was so exciting to be racing on the same course, albeit much slower!

The swim start was amazing, as we lined up along Ullswater lake to watch the pro athletes show us how it is done. They started first and we followed at five second intervals. (My next view of Alistair Brownlee was when he was being interviewed having won and broken the course record (3:16:28) and I was only just leaving T2 after completing the bike leg!).

The swim this year was two 800m laps of Ullswater, (a tropical 13 degrees celsius) with an Aussie style exit in between laps – where you exit and re-enter the swim.

The bike route followed Ullswater for a few kilometres and then I began the first steady climb before a fast descent and a stunningly scenic ride south to Ambleside. This is where the famous part of the bike route starts.

As soon as you leave Ambleside, the average 14% climb starts, which continues for around 5km before the final 500m known as ‘the struggle’. My legs were burning but despite the appallingly bad weather (and COVID-19 restrictions), there were still supporters out at the side of the road cheering everyone on, which got me up that final kicker.

Once back, I pulled on my trail shoes and (required) backpack, which contained appropriate clothing for the terrain and weather, and food and drink for the run. Due to Covid, the event could do not provide aid stations.

The run is like no other triathlon run I have ever done. The first 1km or so is a relatively standard trail but then you start the climb to Birkhouse Moor (718m). This is a walk, not a run , unless fell running is your strength!

After that, the fun starts, with a steep climb to reach the summit by which point I was using my hands to help me scramble over a ridge of jagged igneous rocks. At least it had stopped raining by this point.

On my way down, the clouds gave way to glorious sunshine and as I ran into town to the finish, I was buoyed by encouragement from spectators.

I overheard one woman say to her family “What an achievement to have done that this morning?”

It was just the push I needed to find untapped energy to run a bit quicker and cross the finish line for a well earned medal.

The Helvellyn Triathlon is absolutely brutal and beautiful in equal measure, and it was one of the most rewarding finish lines I’ve ever experienced.

If you are looking for a challenge of a different kind, I can’t recommend Helvellyn Triathlon enough. This is a 5-star event in all areas from the organisation, to atmosphere and challenge.

My advice for GRTW triathletes

Take the time to recce the route, it made a big difference to my race.

Fuel is so important in this type of event; in addition to the normal triathlon snacks, I managed to eat a jam sandwich on the uphill section of the run!

For more information about the Helvellyn Triathlon.

To build your strength in the off-season for next year, try our Essential Strength for Endurance online programme. The stronger you are, the more efficient you are as a runner or triathlete.

Want to be part of our new women’s triathlon community launching in 2021?