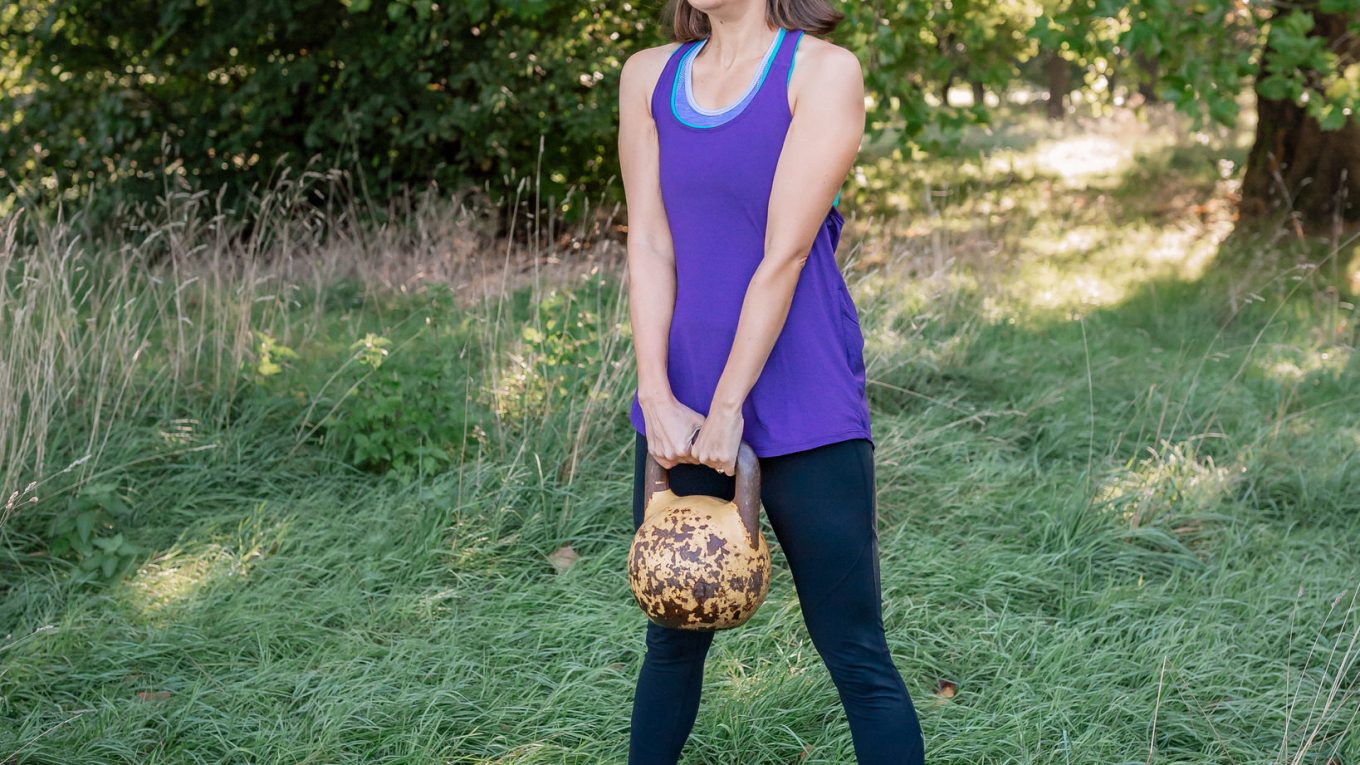 Nowadays, most female runners and triathletes understand the importance of strength training.  When it comes to kettlebells though, many baulk, anxious about it’s look, the movement pattern and potential impact on the back, along with not quite knowing what to do with it.

But put that all to one side, because the kettlebell is the best bit of kit for women training for endurance running and triathlon, not just for the huge benefits it brings but for the fact that it saves SO much time.

In brief, a proper swing involves holding the kettlebell by its handle in both hands with the arms fully extended.

Initially, you keep the back straight, hinge at the hips, allowing the bell to rest between the legs. The swing begins as you explosively drive the hips forward, generating horizontal momentum, causing the shoulders to flex and the kettlebell to travel in an arc from the thighs to eye level.

Upon reaching eye level, the muscles of the shoulder and upper back must decelerate the bell’s travel and resist gravity as the kettlebell returns to the starting position. This means it involves multiple joints and large muscle groups simultaneously. And because the core musculature (abdominals and lower, middle, and upper back) are used to to both accelerate and decelerate the kettlebell, it stimulates nearly the entire body.

But don’t just take our word for it. Here’s three scientifically backed reasons why investing and using a kettlebell is so useful if you’re training for endurance.

Two benefits for one

Kettlebells don’t just give you strength, but worked you cardiovascularly as well. An eight week study *by the University of Wisconsin-La Crosse’s Department of Exercise and Sport Science,(which actually tested female subjects, not just men – hurrah!)  showed a 13% increase in aerobic capacity after training for eight weeks with a kettlebell.

This makes it perfect for those who can’t always get out to run. Use a kettlebell and you get an aerobic workout AND a strength workout.

The above study, also showed an increase of 70% in abdominal core strength, after just eight weeks of training three times per week with kettlebells.

As regular readers of our blog will know, core strength is essential for  stability and performance gains in running and triathlon.

Research on women (hurrah!) by the University of Saskatchewan in 2015, who studied the benefits of kettlebells in HiiT training for women, revealed an increase in anaerobic fitness (speed and power). Just as importantly, or more so for endurance athletes amongst us, improved anaerobic pathways means a quicker recovery time.

*The eight week study included one- and two-handed swings, snatches, cleans, presses, lunges and Turkish get-ups. Many of these movements will. be coached and featured on our new PF20 Kettlebells™ (Performance in 20 minutes)  online course which will go live on our platform on October 28th.

If you are a postnatal woman, we would recommend alternative training before using kettlebells. Postnatal performance online programmes coming soon.